Engineering Software, Linux, and Operations. The website of Jack Neely.

I’m the proud owner of a new Lenovo ThinkPad T61. It has the new 965GM graphics chipset as well as the Intel 4965 a/b/g/n wireless. The T61 is currently only available in widescreen and I have the 14.1” 1440x900 model. So far I’ve been fairly impressed, but it being a new laptop there are always a few tricks to get it working.

Fedora 7 has the new Intel drivers that drive the 965GM and X seems to work fine. However, it appears as if Gnome doesn’t understand the widescreen resolution. GDM, the graphical boot loader, and Gnome itself seems to only want to work in a 1024x768 window in the upper left corner of the screen. In Gnome, I can re-adjust the panels (except the top panel) and move windows and use the space outside the box but the below image is what things look like per default. You can see that the resolution selection app seems to believe that 1024x768 is as high as we go. Does anyone know a solution to this? 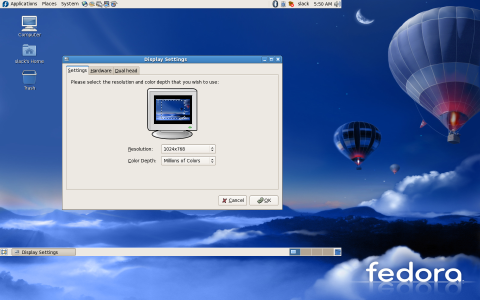 The Intel 4965 wireless does not work out of the box. However, Intel has released drivers as part of the iwlwifi kernel modules. The most recent Fedora 7 kernel (2.6.21-1.3228.fc7) has an older set. It looks like using a newer snapshot of this project and getting the microcode for the wireless card should enable this to work fairly well. This article has some details for getting the iwlwifi code to work on Fedora 7.